Chinese Economy to Grow by 2% in 2020 as Regional Economies Contract, World Bank Says 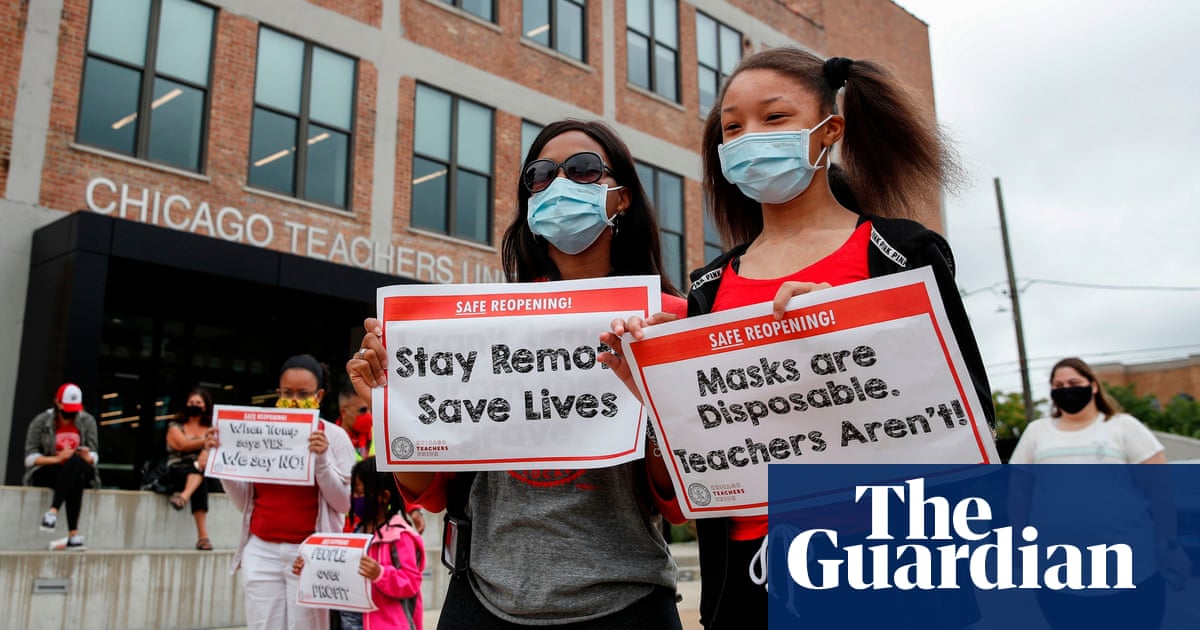 Students in Chicago public schools, the third largest district in the country, will start the school year in September with all-remote instruction, officials announced on Wednesday.

The district backed away from a previously announced plan to combine in-person courses with remote learning in the fall semester, as local governments across the US unveiled a spate of measures intended to rein in the spread of coronavirus.

New York City’s mayor, Bill de Blasio, announced people traveling to the city could be subject to random checkpoints to monitor coronavirus cases, and six state governors announced the formation of a bipartisan coalition to speed up Covid-19 test results.

In Chicago, Mayor Lori Lightfoot said the city’s decision to go completely online, instead of having the district’s 300,000 students return to the classroom two days a week, was because of a recent increase in confirmed cases in the region.

When the initial plan was announced in mid-July, officials had also cautioned it was subject to change based on feedback from families. In a statement, the school district said its survey of families showed 41% of elementary school parents and 38% of high school parents would not send their children to school buildings.

The Chicago Teachers Union also opposed the district’s proposal and had taken preliminary steps to a strike vote, arguing that it was not possible to keep everyone safe in the fall.

The CTU president, Jesse Sharkey, said that with 35 days until classes begin, the district must boost its infrastructure for virtual classes.

“Our remote learning experience must include the infrastructure, professional development, family outreach and staff support to make remote learning robust and enriching for every student,” Sharkey said. “We have a long way to go and a short time to get there.”

The country’s largest school district, in New York City, has not yet announced its plan for reopening. But on Wednesday, De Blasio announced plans to stop potential coronavirus carriers from entering the city by implementing checkpoints.

Dr Ted Long, the chief of the Test & Trace Corps, said 20% of the city’s new cases are people who arrived from outside.

More than 32,000 people have died in the city, which was hard-hit in the spring but has since dramatically lowered the infection and death rates while increasing testing. The state this weekend had a case positivity rate lower than 1%.

Many of the states experiencing an increase in cases are struggling to get test results returned in an effective time period, however.

To reduce the turnaround time for coronavirus testing result, a coalition of three Republican and four Democratic governors announced on Tuesday they had formed an interstate pact to address the problem. The states are Louisiana, Maryland, Massachusetts, Michigan, Ohio, North Carolina and Virginia.

Rapid results are needed for testing to be effective at containing the spread of coronavirus, but states have warned they don’t have the resources to get results in the 24 to 48 hour period recommended by experts. Harvard researchers found that the average wait time was 4.1 days in a group of nearly 20,000 people surveyed in mid- to late July.

The Democratic National Committee on Wednesday announced Joe Biden would not be traveling to Milwaukee for his acceptance speech, as initially planned. Hours earlier, Donald Trump said he was considering giving his acceptance speech from the White House, prompting ethics concerns about laws drawing a line between government officials’ involvement in political activity.

Trump has also said he is seeking a fix to the end of expanded unemployment benefits in the US as Republicans and Democrats shown little signs of progress in negotiations for the next economic relief package.

Democrats are aiming to reach a deal by the end of this week, but they still remain far from the Republicans and the White House on specific issues.

Millions of unemployed Americans meanwhile, are in their second week of not receiving the $600 boost to weekly unemployment benefits. The federal eviction moratorium also expired two weeks ago, though a patchwork of different protections remains in place in several states and cities.

Meanwhile, state officials said Florida has surpassed 500,000 coronavirus cases as testing ramped up on Wednesday following a temporary shutdown of some sites because of Tropical Storm Isaias, which briefly became a category 1 hurricane this week.

‘We Are Witnesses: Chicago’

3-Year-Old Shot, Killed In South Austin Community; Was Third Child Under 10 Shot In Chicago Since Wednesday

Subscribe for $3 for 3 months SPRINGFIELD, Ill. (AP) — Illinois Secretary of State Jesse White has extended expiration dates for driver’s licenses another three months. White announced this week that expired licenses need be renewed by Feb. 1, 2021. The previous extension was until Nov. 1. White extended the deadline to prevent the need […]

Nick Foles has officially been named the starting quarterback of the Chicago Bears. After replacing Mitchell Trubisky this past Sunday and leading a comeback win against the Atlanta Falcons, Foles is taking over, according to head coach Matt Nagy, who announced the decision Monday. (RELATED: David Hookstead Is The True King In The North When It Comes To College Football) […]

ATR created and launched www.WorldTurtleDay.org to increase respect for and knowledge about one of the world’s oldest creatures. MALIBU, CA, USA, September 29, 2020 /EINPresswire.com/ — Theme “Save Us” Reflects Millions of Lives Lost at Live Food Markets and Disappearing Endangered Turtles American Tortoise Rescue (ATR), a nonprofit organization established in 1990 for the protection […]

MEXICO CITY, Sept. 28, 2020 /PRNewswire/ — Axalta (NYSE:NYSE:AXTA), a leading global supplier of liquid and powder coatings, announced its regional refinish training program, “Axalta on Tour,” is being held virtually this year to ensure the health and safety of the participants and instructors. The training program provides continuous learning opportunities to Axalta’s automotive refinish […]

BROOKLYN, N.Y.–(BUSINESS WIRE)–Sep 28, 2020– HITN TV announced today major steps toward the expansion of Edye, its premium SVOD (Subscription Video-on-Demand) service. Edye offers smart and safe entertainment for preschool children between the ages of two and six years old. Edye released a suite of Apple iOS and Android mobile apps that will offer both […]

Another Acre, Another Goat: Israel in the Middle East

Abraham Accord signing ceremony in Washington. (Photo: File) By Reza Behnam In the early 1900s, Zionism’s founders laid out their strategy to build a Jewish state in Palestine. According to the plan, colonization had to be slow and covert, beginning with small land acquisitions. In the words of Zionist leader, Chaim Weizmann, “another acre, another […]

BENGALURU: Online higher education company upGrad has announced the appointment of Saranjit Sangar as the CEO – UK, Europe, and Middle East, in a move to strengthen its penetration into the international markets, said a statement issued today. Sangar is an experienced leader with a diverse international career across e-commerce (Amazon, UK), last-mile logistics (Amazon, […]

BAGHDAD — Iraqi Foreign Minister Fuad Hussein paid an official visit to neighboring Iran during the past two days for discussions over the situation in the Middle East region and bilateral relations. A statement by the Iraqi Foreign Ministry issued on Monday said Hussein conveyed a verbal message from Iraqi Prime Minister Mustafa al-Kadhimi to […]

APERTUS Aviation was named the winner of Silver and Bronze Stevie Award in the Innovation in Cross-Media Marketing and Innovation in Events category LONDON, UK, September 28, 2020 /EINPresswire.com/ — APERTUS AVIATION WINS SLIVER AND BRONZE STEVIE® AWARD IN 2020 ASIA-PACIFIC STEVIE AWARDSWinners to Be Celebrated During Virtual Event on 22 September APERTUS Aviation was […]

Mumbai: German mattress brand Emma said it is considering investing €100 million in the Indian and Asia-Pacific markets to cash in on the rising demand for bed-in-a-box products. Since its launch in India about two years ago, Emma’s India business have risen sharply, with a two-fold jump just in sales last quarter. “We see India […]

The prospect of thousands of trucks queuing to cross the Channel as a result of Brexit proves the the need for a ferry linking Scotland to Europe, an SNP MP has said. Douglas Chapman wants to see a ferry sailing from Rosyth to the continent instead of road hauliers being forced to drive to the […]