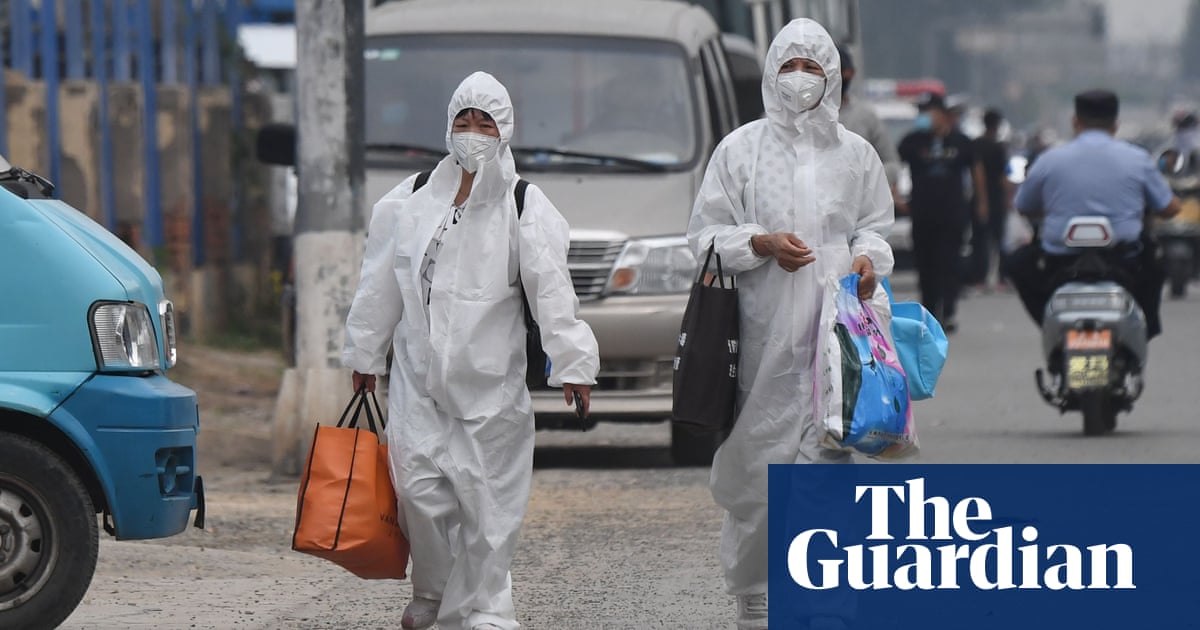 China has reported its highest daily number of new coronavirus cases in months as parts of Beijing remained under lockdown, offering a second-wave warning to the rest of the world as the pandemic rages in South America and global cases approach 7.8 million.

The shock resurgence in domestic infections on Sunday has rattled China, where the disease emerged late last year but had largely been tamed through severe restrictions on movement that were later emulated across the globe.

It also provides a bleak insight into the difficulties the world will face in conquering Covid-19 – even as countries in Europe prepare to reopen borders at the beginning of the summer holiday season after an encouraging drop in contagion.

Of the 57 new cases logged by Chinese authorities, 36 were domestic infections in the capital, where a large wholesale food market at the centre of the outbreak has been closed and nearby housing estates put under lockdown.

“People are scared,” a fruit and vegetable trader at another local market in central Beijing told AFP.

Minorities more at risk from Covid-19 because of racism, says report

“The meat sellers have had to close. This disease is really scary,” said the man, adding that there were fewer customers than normal.

At least 430,000 people worldwide have died from Covid-19, and the total number of confirmed cases has doubled to 7.78 million in slightly over a month. The disease is now spreading most rapidly in Latin America, where it is threatening healthcare systems and sparking political turmoil.

Brazil now has the second-highest number of virus deaths after the US, surpassing Britain’s toll, and the Chilean health minister, Jaime Manalich, resigned on Saturday amid a furore over the country’s true number of fatalities.

There have been frequent reports of spats among health ministry officials, and Manalich has been criticised by opposition politicians, mayors, medical experts and social groups for refusing to release more detailed contagion data or apply lockdowns sooner.

The sudden reshuffle comes as Chile faces its toughest month in the pandemic so far, with spiralling active cases and death rates. The country now has the highest number of confirmed cases per million people in Latin America, reporting a total so far of 167,355 on Saturday and 3,101 deaths in a population of 19 million.

Elsewhere in Latin America, an evacuation flight carrying about 230 British nationals and residents left Colombia’s main airport in Bogota, bound for Heathrow. The plane will return with Colombian evacuees on Sunday.

Colombia, which is relaxing some of its lockdown measures, currently has confirmed 46,858 cases of Covid-19, with 1545 deaths. Daily cases are climbing, with 1646 confirmed on Saturday, worrying experts that the worst is about to hit.

In Mexico, the health ministry reported 3,494 new confirmed coronavirus infections along with 424 additional fatalities on Saturday, bringing the total in the country to 142,690 cases and 16,872 deaths.

While Latin America grapples with its rising tide of cases, many European nations are lifting lockdowns and opening borders.

After the European Commission urged a relaxation of restrictions, a number of nations are preparing to reopen borders on Monday – while some like Poland have done so already, with people from other European Union countries allowed to visit.

Germany said it would end land border checks on Monday, and France said it would gradually reopen its borders to non-Schengen countries from July. Greek prime minister Kyriakos Mitsotakis travelled to picturesque Santorini island to open his country’s tourism season, while Venice sprang back to life on Saturday as hundreds of tourists flocked to the city for the reopening of the iconic Doge’s Palace.

In other developments around the world:

IDES Increases Workers, Calls, But Long Waits For Callbacks Continue For Many

CHICAGO (CBS) — Two weeks ago a spokesperson for the Illinois Department of Employment Security said they added 100 call takers to their virtual call center, but people continue to reach out to CBS 2 about long waits for help. “I’m approved. This money should be mine. But I can’t even get through to somebody to […]

Chicago Weather: Mostly Sunny, Hot But A Chance For Some Storms Saturday Afternoon

CHICAGO (CBS) — As heat and humidity continue to build, there is a growing chance of a thunderstorm on Saturday afternoon. Those storms could begin by 2 p.m .and scatter about through sunset. The Storm Prediction Center has our area with a “marginal” risk for severe weather. That’s a one on a scale 1 to […]

Car Catches On Fire On I-94 Near Libertyville

LIBERTYVILLE, Ill. (CBS) — Firefighters were called out to I-94 near Libertyville Friday night to put out a car fire. It happened around 11:45 p.m. near mile marker 14. Illinois State police found the car fully engulfed in flames on the right shoulder of the road. Around 1:15 a.m. they closed two lanes of the road […]

Testing for coronavirus in California The deadly COVID-19 (Coronavirus) cases in Latin America exceeded six million on Friday and continued to accelerate. The region remains the world worst-affected by the pandemic as most of its nations begin to relax lockdown measures. The region, which has reported an average of more than 86,000 daily infections of the […]

The region’s worst-affected country is Brazil, which has the most cases in the world after the United States, and 15% of world’s total Santiago: Coronavirus cases in Latin America, the region of the world worst-affected by the pandemic, exceeded 6 million on Friday and continued to accelerate, according to a Reuters tally, as most of […]

Joe Kennedy saw what we all saw in May, those horrifying 8 minutes, 46 seconds, the knee on George Floyd’s neck as he pleaded, in vain, for his life. It was not a mental picture that would be discarded, possibly ever. And when it was time to speak again with the basketball players at Holy […]

8 hours ago Login / Register to save Share on social media × RUNDU – Staff from the Kavango East Regional Council have been working from home this week due to possible coronavirus exposure. Chief Regional Officer (CRO) Ludwig Thikusho is said to have come in contact with a confirmed case of Covid-19. Thikusho told New […]

President Donald Trump is cock-a-hoop over the United Arab Emirates becoming the first Arab Gulf state to normalise its relations with Israel. He needs all the good news he can get in the months before the US presidential election. “HUGE breakthrough today! Historic Peace Agreement between our two GREAT friends, Israel and the United Arab […]

Related Articles Beruit, SANA-Secretary General of Hezbollah, Sayyed Hassan Nasrallah, affirmed that the victory in July 2006   war foiled the New Middle East Project and US, Israeli plots that targeted the region, thanking Syria and Iran for their role to achieve the victory. “We blesse all Lebanese on the victory and thank all who played […]

Joe Kennedy saw what we all saw in May, those horrifying 8 minutes, 46 seconds, the knee on George Floyd’s neck as he pleaded, in vain, for his life. It was not a mental picture that would be discarded, possibly ever. And when it was time to speak again with the basketball players at Holy […]

8 hours ago Login / Register to save Share on social media × RUNDU – Staff from the Kavango East Regional Council have been working from home this week due to possible coronavirus exposure. Chief Regional Officer (CRO) Ludwig Thikusho is said to have come in contact with a confirmed case of Covid-19. Thikusho told New […]

KABUL — The Afghan government freed 80 inmates out of 400 Taliban inmates on Thursday, spokesman of the Office of the Afghan National Security Council confirmed on Friday. The government released 80 Taliban convicts out of the 400 that the Consultative Loya Jirga, or the Grand Assembly, approved to release, spokesman Javid Faisal said in […]

The quarantine imposed by the UK on arrivals from France has come into effect, as coronavirus restrictions resurface throughout Europe amid a continued rise in cases. France has promised a “measure of reciprocity” after the UK added the country to its list of nations where any arrivals have to spend two weeks in self-isolation. Late […]