Illinois Surpasses 12,000 COVID-19 Cases, 300 Deaths; Officials Warn Against Large Gatherings As Weather Warms Up; ‘Do Not Go Meet People, Do Not’

A Illinois man says he may never return to see his extended family in his native Mexico after a gang beat and shot him three times while he was there on a Christmas vacation.

José Luis Gutiérrez spoke out for the first time this week about his nightmarish road trip in the western state of Jalisco, where he was celebrating with his relatives.

The married father-of-three was driving with his 19-year-old daughter, Sofía Gutiérrez, and his 81-year-old father, José de Jesús Gutiérrez, when they stopped on the side the road in the north-central state of Zacatecas to rest on the night of December 23.

They were then attacked by a group of about five or six men.

One of the suspects forced him out of the car at gunpoint and placed the gun over his ear and then led him inside the gang’s vehicle, where another man aimed his weapon.

‘They told me to get down and I got down and I went around the car and then one of them placed a weapon behind my ear,’ José Luis said in an interview with NBC 5 Chicago via Skype from Texas.

Illinois resident José Luis Gutiérrez spoke out for the first time this week after a group of men attacked him and shot him three times on a remote road in Zacatecas, Mexico, on December 23

José Luis Gutiérrez was severely beaten and shot in the hip and twice in the leg during a violent ambush in the state of Zacatecas on December 23. Mexican authorities later found him in the middle of the road (above)

The suspects then drove José Luis, who lives in the Chicago suburb of Aurora, about 200 feet down the road and contemplated killing him while he tried to bargain with his captors.

‘Tell me what you want, I can help you,’ he said he begged them.

One the kidnappers then ordered him ‘to the floor.’

He then heard one chant ‘kill him, kill him’, while another disagreed saying, ‘I won’t kill him here because it will stain the car with blood and then how are we going to clean it?’

José Luis, who works as a landscaper, put up a struggle with the kidnappers. He gained control of a gun that was placed on his head and threw it to the ground.

The victim then grabbed one of the abductors and used him for cover. The gunman fired, hitting him in the hip and twice in the leg.

Mexican authorities later found José Luis Gutiérrez in the middle of the road in Zacatecas on December 23. He was airlifted to a nearby hospital for treatment and then transferred to a hospital in Laredo, Texas, on January 2 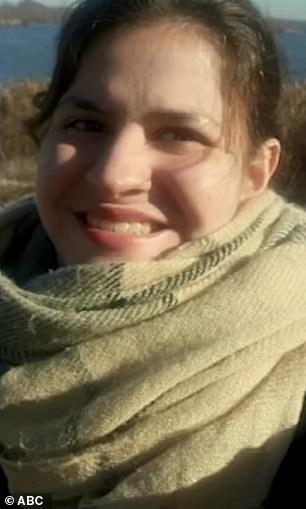 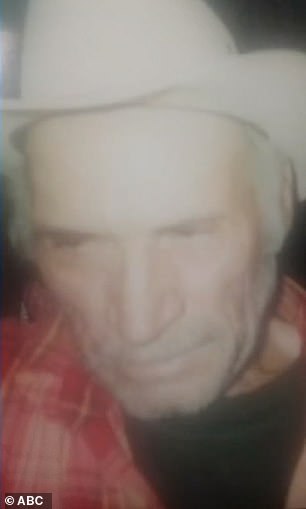 His family say José Luis was driving slowly because he was getting tired when the SUV with the group of assailants cut them off and cornered them.

They opened the doors and started hitting José Luis’s daughter and father.

He was attacked when he tried to protect his family in the remote road.

All of their possessions, including their American passports, were stolen in the ambush.

Mexican authorities later found José Luis in the middle of the road. 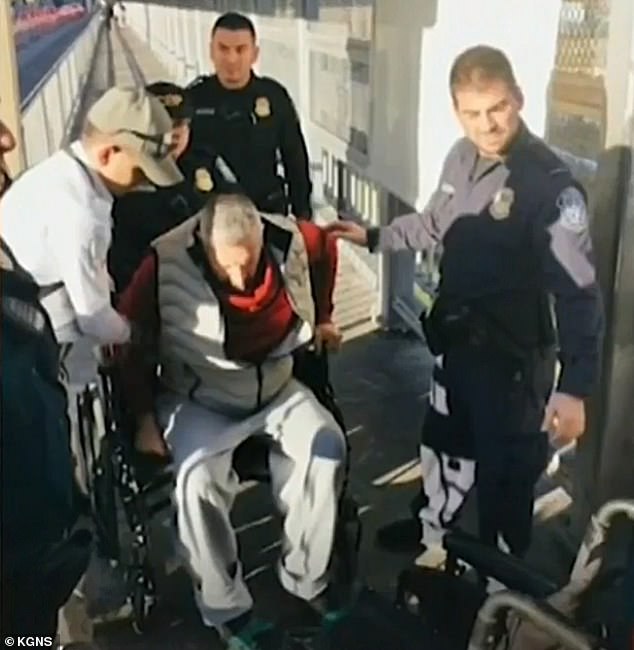 José Luis Gutiérrez is now recuperating in Dallas, Texas, before he can return to his home in Aurora, a suburb of Chicago 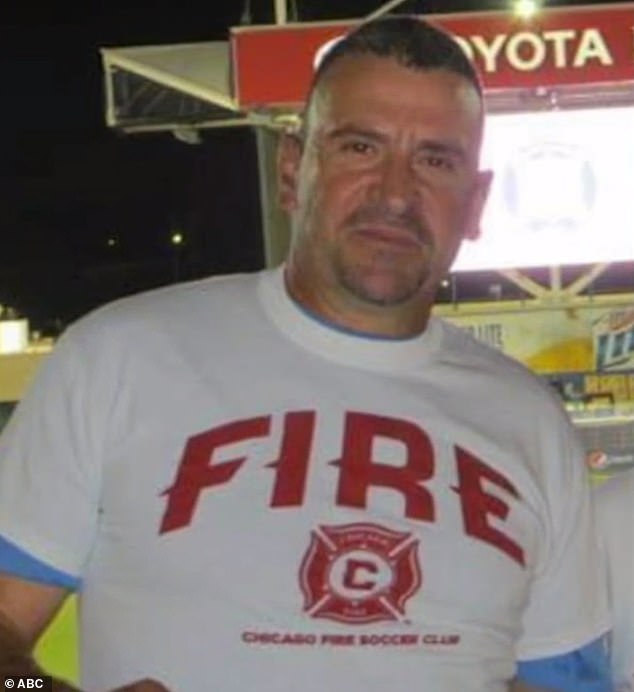 Gutiérrez, who lives in the Chicago suburb of Aurora, where he works as a landscaper, was en route to the western state of Jalisco to spend Christmas with relatives when he was nearly killed by a gang during a roadside ambush in the north-central state of Zacatecas

He was airlifted to a nearby hospital for treatment.

According to NBC affiliate KGNS TV, the League of United Latin American Citizens assisted the family with the necessary paperwork to transfer José Luis to a medical facility Laredo, Texas, on January 2.

He is now in Dallas receiving treatment before he is permitted to return to his home.

Guiterrez’s daughter and father didn’t suffer any serious injuries in the ambush.

‘My daughter had a nervous shock, she got really scared. And my father-in-law is older,’ then said Alejandra Gutiérrez, José Luis’ wife.

‘I am worried about the three of them.’

With 899 new people confirmed with coronavirus across the state, Illinois has now 11,256 known cases of COVID-19, the state’s public health director said Sunday. This is down from the 1,453 cases, including 33 deaths, announced Saturday. Illinois saw 31 deaths more deaths, Dr. Ngozi Ezike said on Sunday. There now have been 274 deaths […]

SPRINGFIELD – Illinois became the seventh U.S. state to eclipse 300 deaths from COVID-19 on Monday as the state Department of Public Health announced an increase of 33 deaths and 1,006 cases in the past 24 hours. “Seventy percent of the individuals who have lost their fight against COVID have had a comorbid condition,” said […]

TORONTO — Manufacturing giant 3M said Monday it has an agreement with the Trump administration that will allow the company to continue to export N95 protective masks to Canada and Latin America amid the coronavirus pandemic. The company said the U.S. government and 3M MMM, +5.16% have a plan to produce 166.5 million masks over […]

The Latest: 3M has OK to send masks to Canada, Latin America

Latin America Mobilizing To Deal With Hunger Amid Pandemic

BUENOS AIRES/SAO PAULO/MONTEVIDEO – The spread of the coronavirus in Latin America poses an additional challenge for the region that other parts of the world are not confronting: How to feed the 187 million people who don’t have a guaranteed meal on the table? The quarantines governments throughout the region have decreed due to the […]

DUBLIN–(BUSINESS WIRE)–Apr 6, 2020– The “Graft-Versus-Host Disease: Epidemiology Forecast in Asia-Pacific Markets to 2028” report has been added to ResearchAndMarkets.com‘s offering. GvHD is a common complication of allogeneic HSCT that occurs when the donated (graft) cells are rejected and attack the host’s cells as foreign. GvHD can progress from mild to severe forms as either […]

The unprecedented public health emergency triggered by the COVID -19 pandemic and its multi-faceted impact on people’s lives around the world is taking a heavy toll on Asia and the Pacific. Countries in our region are striving to mitigate the massive socioeconomic impact of the pandemic, which is also expected to affect the region’s economic […]

Coronavirus pandemic: There seems to be some light at the end of the tunnel in Europe

So there does seem to be some light at the end of the tunnel amid the coronavirus pandemic, and for once it doesn’t appear to be an oncoming train. Numbers of deaths are apparently falling almost everywhere across Europe, as are the number of new infections, and in many cases the numbers being admitted to […]

CoE commissioner: Urgent steps are needed to protect the rights of prisoners in Europe

Council of Europe Commissioner for Human Rights Dunja Mijatovic called on CoE member states to protect the rights and health of all detainees during the global COVID-19 pandemic.  The statement runs as follows:Convicted prisoners and persons on remand are among those most vulnerable to viral contagion as they are held in a high-risk environment: in general, […]

Last month was the sixth-warmest in Europe since 1979 and cooler than the three warmest months of March worldwide, according to a statement from Copernicus, the European Union’s Earth observation agency. Generally, global temperatures were close to the second and third warmest Marches (2017 and 2019) on record, while in the westernmost parts of Europe, […]