Illinois Surpasses 12,000 COVID-19 Cases, 300 Deaths; Officials Warn Against Large Gatherings As Weather Warms Up; ‘Do Not Go Meet People, Do Not’

Donald Trump wants NATO to take more responsibility in the Middle East, and said Thursday that he proposed the organization change its name to NATOME.

When asked at the end of a briefing where the administration announced its proposed National Environmental Policy Act regulations about NATO, Trump says he believes they should be doing more in the hotly contested region.

‘I spoke to Secretary General yesterday and we had a great conversation. He was very – I think he was actually excited by it. And I actually had a name: NATO, right, and then you have M-E – Middle East. You’d call it NATOME, I said, ‘What a beautiful name, NATOME,’ Trump said, recalling his conversation with the Secretary General of the North Atlantic Treaty Organization Jens Stoltenberg.

‘USMCA, like the song YMCA,’ he said in reference to the United States–Mexico–Canada Agreement name’s similarity to the 1978 hit. ‘Everybody – nobody could remember remember USMCA, I said, ‘Think of the song YMCA.’ Now everybody says it.’

Donald Trump said Thursday that he wants NATO to expand to take more responsibility in the Middle East, and said he had an idea to rename the North Atlantic Treaty Organization to NATOME to include the region

‘They don’t remember the previous name of the bad deal, OK, commonly known as NAFTA. If you add the two words Middle East at the end of it, because that’s a big problem, that’s a big source of problems. And NATOME, doesn’t that work beautifully… Think of that – NATO plus ME.’

While addressing the nation on Wednesday regarding the escalating tensions between the U.S. and Iran, Trump said NATO had to do more to ease the situation in the Middle East.

‘Yeah,’ he said about more NATO people working there, ‘as opposed to us, to be honest with you, because this is an international problem. And we can come home, or largely come home, and use NATO.’

‘This is an international problem,’ he continued. ‘So I think that NATO should be expanded and we should include the Middle East, absolutely. We pay for a big percentage of NATO. And by the way, if you look at and speak to Secretary General Stoltenberg – who’s doing a terrific job by the way – he will tell you that I raised $130 billion more than they were getting.’

Trump also claimed Stoltenberg is his biggest fan because of the money he’s brought in for NATO.

‘I came in, I said, ‘You got to pay folks, got to pay. We’re working with you, we’re protecting you, we’re a part of this. You’ve got to pay. We don’t want to be the fools like we have been for so many years.’ So we raised $130 billion almost immediately. We had a meeting with all of the countries.’ 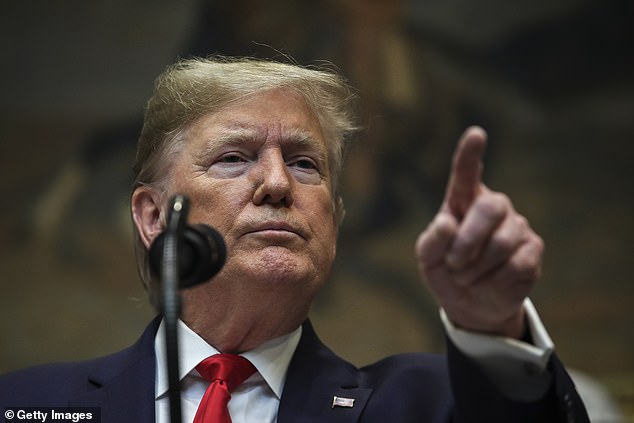 Trump also praised himself during the White House briefing for comuning up with clever names, including for the USMCA for the United States–Mexico–Canada Agreement, which he said could be linked and remembered by the song ‘YMCA’

‘I mean I can imagine that they don’t like me as much as Obama and other people. But they’ve got to pay. We’re protecting, you’ve got to pay,’ he continued.

‘In fact my biggest fan in the whole world is Secretary General Stoltenberg because he can’t believe it,’ Trump boasted. ‘And now he just announced $530 billion we’ve got under my watch. So we’re in good shape with that whole situation. And I think NATO should be helping us now with the Middle East. Having an international flavor there is good.’

Tensions between Tehran and Washington D.C. reached a head last week when Trump ordered a drone strike on an Iraqi airport that took out Iranian General Qassem Soleimani.

The attack was directed after protesters who support Iran-backed Shia militia on New Years Eve stormed the U.S. Embassy in Baghdad, which has never been breached before.

Iran responded to Soleimani’s death by sending almost two dozen ballistic missiles at bases in Iraq that held U.S. troops. No Americans were killed or injured.

Paras and Royal Anglians in Afghanistan as Nato bodyguards

With 899 new people confirmed with coronavirus across the state, Illinois has now 11,256 known cases of COVID-19, the state’s public health director said Sunday. This is down from the 1,453 cases, including 33 deaths, announced Saturday. Illinois saw 31 deaths more deaths, Dr. Ngozi Ezike said on Sunday. There now have been 274 deaths […]

SPRINGFIELD – Illinois became the seventh U.S. state to eclipse 300 deaths from COVID-19 on Monday as the state Department of Public Health announced an increase of 33 deaths and 1,006 cases in the past 24 hours. “Seventy percent of the individuals who have lost their fight against COVID have had a comorbid condition,” said […]

TORONTO — Manufacturing giant 3M said Monday it has an agreement with the Trump administration that will allow the company to continue to export N95 protective masks to Canada and Latin America amid the coronavirus pandemic. The company said the U.S. government and 3M MMM, +5.16% have a plan to produce 166.5 million masks over […]

The Latest: 3M has OK to send masks to Canada, Latin America

Latin America Mobilizing To Deal With Hunger Amid Pandemic

BUENOS AIRES/SAO PAULO/MONTEVIDEO – The spread of the coronavirus in Latin America poses an additional challenge for the region that other parts of the world are not confronting: How to feed the 187 million people who don’t have a guaranteed meal on the table? The quarantines governments throughout the region have decreed due to the […]

DUBLIN–(BUSINESS WIRE)–Apr 6, 2020– The “Graft-Versus-Host Disease: Epidemiology Forecast in Asia-Pacific Markets to 2028” report has been added to ResearchAndMarkets.com‘s offering. GvHD is a common complication of allogeneic HSCT that occurs when the donated (graft) cells are rejected and attack the host’s cells as foreign. GvHD can progress from mild to severe forms as either […]

The unprecedented public health emergency triggered by the COVID -19 pandemic and its multi-faceted impact on people’s lives around the world is taking a heavy toll on Asia and the Pacific. Countries in our region are striving to mitigate the massive socioeconomic impact of the pandemic, which is also expected to affect the region’s economic […]

Coronavirus pandemic: There seems to be some light at the end of the tunnel in Europe

So there does seem to be some light at the end of the tunnel amid the coronavirus pandemic, and for once it doesn’t appear to be an oncoming train. Numbers of deaths are apparently falling almost everywhere across Europe, as are the number of new infections, and in many cases the numbers being admitted to […]

CoE commissioner: Urgent steps are needed to protect the rights of prisoners in Europe

Council of Europe Commissioner for Human Rights Dunja Mijatovic called on CoE member states to protect the rights and health of all detainees during the global COVID-19 pandemic.  The statement runs as follows:Convicted prisoners and persons on remand are among those most vulnerable to viral contagion as they are held in a high-risk environment: in general, […]

Last month was the sixth-warmest in Europe since 1979 and cooler than the three warmest months of March worldwide, according to a statement from Copernicus, the European Union’s Earth observation agency. Generally, global temperatures were close to the second and third warmest Marches (2017 and 2019) on record, while in the westernmost parts of Europe, […]