Dominic Raab has insisted Boris Johnson is ‘in charge’ of the UK’s response to rising tensions in the Middle East amid growing criticism over the Prime Minister’s decision not to cut short his Caribbean holiday.

Mr Johnson is due to fly back to the UK today after a trip to the private island of Mustique to celebrate the New Year with partner Carrie Symonds.

His opponents have attacked him for so far remaining silent over the US’s fatal strike on Iran‘s top general, Qassem Soleimani, on Friday which has plunged the region into fresh instability.

But Mr Raab, the Foreign Secretary, said this morning that he had been ‘in constant contact’ with the PM in recent days as he called for ‘deescalation’ in the stand off between the US and Iran.

Mr Raab also revealed he spoke to the Iraqi prime minister this morning as well as to the Iraqi president last night and that he intended to reach out to the foreign minister of Iran to call for calm.

Responding to suggestions that the PM had ‘put his feet up’ after winning a majority at the general election last month, Mr Raab said: ‘No, that is not right. The Prime Minister is in charge. In fact I have been in constant contact with him over the Christmas break on a whole range of foreign policy issues.

‘We were in touch on Friday in relation to the situation in Iraq and the whole government is working very closely together.

‘I spoke to the Defence Secretary last night, I talked to the National Security Adviser on Friday and we are very clear on the strategy and we are implementing it.

‘He will be back in play tomorrow, in the UK.’

Asked by Sophy Ridge on Sky News why the PM had not come back to the UK early, Mr Raab said: ‘He is in charge, as I said, and we have been in regular contact over the Christmas break.

‘What really matters here is that the government has got a very clear strategy and message which is that we want to see deescalation, we are going to do everything we can to protect UK diplomatic and military missions and we are going about that business.’

Dominic Raab, pictured this morning in central London, has called for ‘deescalation’ in the stand off between the US and Iran

Boris Johnson, pictured in Downing Street on December 19, is yet to comment on the US killing of Iran’s top general Qassem Soleimani but Mr Raab said today the PM is ‘in charge’ of the UK’s response

People carry the casket of Iranian commander Qassem Soleimani upon arrival at Ahvaz International Airport on Sunday. The casket was greeted by chants of ‘Death to America’ as Iran issued new threats of retaliation 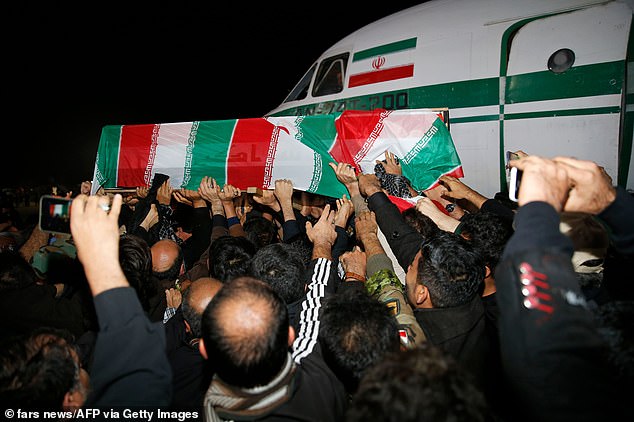 Military personnel carry the casket of Iranian commander Qassem Soleimani in Iran. A tide of mourners packed the streets of the Iranian city of Ahvaz on Sunday to pay respects to top general Soleimani, days after he was killed in a US strike

There are fears of all-out war after Iran threatened revenge over the Donald Trump-approved attack in Baghdad, Iraq, on Friday and as the US sent 3,000 extra troops to Kuwait.

The Foreign Office has issued strengthened travel advice to Britons across the Middle East including Saudi Arabia and Turkey, while the Navy will begin accompanying UK-flagged ships through the key oil route of the Strait of Hormuz.

Meanwhile, military chiefs are understood to have ordered 400 soldiers training local forces in Iraq to scrap their duties to switch to ‘force protection’ to defend themselves and British diplomats from potential revenge strikes.

The Foreign Secretary this morning declined to give his full backing to the US strike that killed Soleimani as he labelled the general a ‘regional menace’.

But he defended the US’s right to act as he said ‘we understand the position that the Americans found themselves in’.

‘They have a right to exercise self-defence, they have explained the basis on which that is done and we are sympathetic to the situation they found themselves in,’ he said.

‘But there is a risk with the heightening of tensions and we now seek deescalation and the stabilisation of the situation and a war in fact is in no-one’s interest.

‘The only people that would gain would be Daesh and the terrorists that would exploit the vacuum.’

Mr Trump used Twitter on Saturday night to threaten to hit dozens of targets in Iran ‘very fast and very hard’ if it retaliates for the killing of Soleimani.

Jeremy Corbyn said the ‘assassination’ risks ‘an extremely serious escalation of a dangerous conflict with global consequences by a belligerent US president’.

‘Boris Johnson should have immediately cut short his holiday to deal with an issue that could have grave consequences for the UK and the world,’ the outgoing Labour leader added.

She told Sky’s Sophy Ridge: ‘We should take responsibility, we are international players, of course, we have other preoccupations, and clearly the Prime Minister has a lot of preoccupations – he’s sunning himself drinking vodka martinis somewhere else and not paying attention to this.

‘We’ve had three Cobra meetings where Mark Sedwill, the chief civil servant, has had to chair it because the Prime Minister hasn’t been available.’

Mr Raab is expected to meet his French and German counterparts early this week before travelling to Washington DC on Thursday for face-to-face talks with US secretary of state Mike Pompeo.

The meeting, understood to have been arranged ahead of the strike, comes after Mr Pompeo criticised the UK’s response.

‘Frankly, the Europeans haven’t been as helpful as I wish that they could be,’ he told Fox News.

‘The Brits, the French, the Germans all need to understand that what we did, what the Americans did, saved lives in Europe as well.’

Later, Defence Secretary Ben Wallace gave the strongest backing to the US despite urging ‘all parties’ to de-escalate as he announced the Royal Navy’s bolstered plan to protect UK ships and citizens in the region. 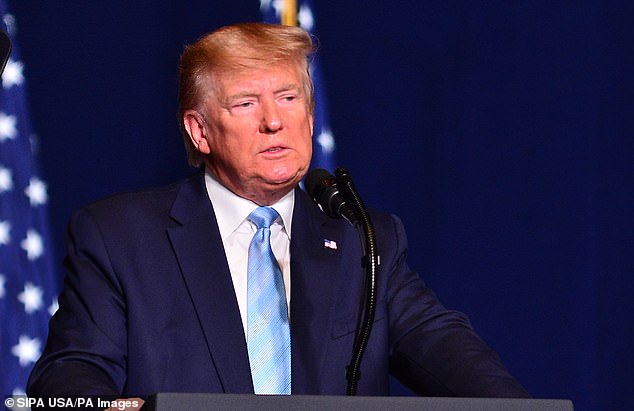 Trump threatened to hit 52 critical targets in Iran in retaliation if Tehran strikes any American interests in the region, upping the stakes after Iran said it had identified 35 targets for potential strikes 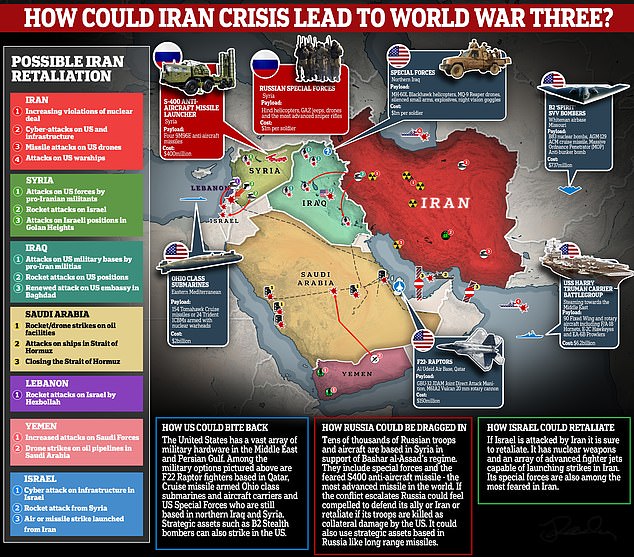 Iran is considering its options against America in retaliation for the killing of Quds commander Qassem Soleimeni in Baghdad. The conflict could quickly spiral out of control, dragging in other world powers including Russia, Turkey and China

After speaking to his US counterpart Mark Esper on Friday, Mr Wallace said American forces have been ‘repeatedly attacked by Iranian-backed militia’ in Iraq during ‘the last few months’.

‘General Soleimani has been at the heart of the use of proxies to undermine neighbouring sovereign nations and target Iran’s enemies,’ Mr Wallace continued.

‘Under international law the United States is entitled to defend itself against those posing an imminent threat to their citizens.’

Acting leader of the Liberal Democrats Sir Ed Davey added to criticism of the PM.

‘The Prime Minister must speak out now and make clear Britain will not support the US in repeating the mistake of the Iraq war.’

Labour’s John McDonnell vowed during an anti-war protest at Downing Street to press Mr Johnson over the attack, which will ‘set the Middle East and the globe alight yet again’.

‘And it’s not good enough for the UK Government just to appeal for a de-escalation, what we expect the UK Government to do is to come out in total and outright condemnation of this act of violence,’ the shadow chancellor said.

Political trends in the Middle East: mistrust, knife in the back, eye for an eye

Situation in Middle East was a direct result of US’ arrogance: FM Zarif

IMF Lowers Prediction of Middle East Economy Growth to 2.8% in 2020

CARBONDALE, Ill. — Northern Iowa’s season was going smoothly heading into a Wednesday night matchup against Southern Illinois. The Panthers were16-2 on the season and the frontrunners in the Missouri Valley Conference. But it just takes a one-off bad night to take a loss — and the Panthers were caught napping against the Salukis in […]

CHICAGO (CBS)– Illinois health officials announced the second confirmed case of coronavirus in the U.S. was located in Chicago. Coronavirus in Chicago: CDPH says patient did NOT take public transportation or come in close contact with anyone outside her home They say patient was asymptomatic (not showing symptoms) during her travel, which they say = […]

Kolkata: Samsung India‘s managing director HC Hong is moving to head the overall Latin America region for the Korean smartphone and electronics giant. The company announced the exit of Hong by informing select trade partners and employees on Friday. Samsung India did not respond to an email till Friday press time. The change in Indian […]

Maruti Suzuki India Limited has commenced the exports of the successful S-Presso hatchback crossover, to various nations in Asia, Latin America and Africa. The Maruti Suzuki S-Presso is one of the newest products in the Indian brand’s affordable portfolio. Essentially a raised budget hatchback commercialised as a ‘mini-SUV’, the Maruti S-Presso was launched back in […]

It was a curious exchange. Frustrated by the attacks on his party — the Movement for Socialism (MAS) — former president of Bolivia Evo Morales made an audio recording in which he called upon his supporters to form militias. Maximilian Heath of Reuters went to Argentina to speak with Morales about this leaked recording; Morales said, […]

Travelling world in 52 weeks was hardest thing I’ll likely ever do: Sebastian Modak

A man paid to travel the world in 52 weeks says it was the hardest job he’s ever had. Sebastian Modak was paid to visit all 52 places on the New York Times’ annual “52 Places to Travel” list in the space of a year, with no days off. “I didn’t have a day off […]

“The two leaders exchanged views on recent developments in the Middle East and agreed on the need for de-escalation and dialogue in order to reduce tensions and promote peace and stability in the region,” the readout said on Wednesday. Trudeau and Erdogan also discussed the recent Ukrainian airplane crash in Iran that claimed the lives […]

Travelling world in 52 weeks was hardest thing I’ll likely ever do: Sebastian Modak

A man paid to travel the world in 52 weeks says it was the hardest job he’s ever had. Sebastian Modak was paid to visit all 52 places on the New York Times’ annual “52 Places to Travel” list in the space of a year, with no days off. “I didn’t have a day off […]

Stefano Baronci: “Duty free operators must be able to count on the expansion of airport infrastructure along with new retail space and a regulatory framework that incentivises the market to grow” INDIA. Airports Council International (ACI) Asia-Pacific and Asia Pacific Travel Retail Association (APTRA) have both called for a favourable outcome in the wake of […]

Low value deals dominated the Asia-Pacific venture capital funding landscape at the end of 2019 thanks to trade tensions and an economic slowdown in the region, new research shows. Investments of less than $10m made up the lion’s share of VC activity in the region in Q4 according to the latest report from data and analytics […]

By Leo McKinstry, The Spectator, 17 August 2002: The modern MEP is a titan of tedium, a figure whose every action spreads ennui through our civic life. Only a hardline bore would want to handle the pettifogging bureaucratic activities of the European parliament, and only a true bore could possibly think that the pontificating and […]